skip to main | skip to sidebar

Click here for images: http://www.fecalface.com/gallery/kottie.html
If you can’t make it to FFDG by May 7th, check out Booklyn Artist Alliance:
http://www.booklyn.org/artists/%3Ch2%3EKottie%20Paloma,%20San%20Francisco,%20CA%3C/h2%3E.php

People familiar with Kottie Paloma's work know that it is geared for, um, an adult audience. With titles like “Everybody F*cks” and “Drunk Tiger,” his book art could be described as "South Park unmuzzled." But while this show is safely rated PG, it sacrifices none of the artist's trademark edginesss.

“Kottie Paloma and the Daily Strangers” documents the people you see on a regular basis but never meet formally: the corner store clerk; the muni driver who always skips your stop; neighbors in your rent-controlled apartment building; urban campers who bed down in front of your office building.

This is the third exhibition to hang in brand new Fecal Face Dot Gallery. Though the gallery is new, the FF brand name is a stalwart of the local emerging artists scene. http://www.fecalface.com/ is a vibrant online magazine founded in 2000 that covers street, lowbrow and Mission School styles in depth.

In the bricks and mortar space, over 250 five by seven graphite portraits hang together densely like a fraternity composite. According to the artist, installation was a puzzle. It was hard to decide which of the strangers should hang next to each other.

You’re not imagining it- Paloma’s strangers do look alike. As you gaze at the funny looking people, the same patterns begin to emerge on the men and the women: straight bangs, dated-looking square framed glasses, 5 o’clock shadows, shiny bald pates. But it’s the awkward, grimaced expression on each individual that makes them all look related in this wacky family portrait. ($100 each.)

Paloma drew a few portraits a day between assigments while working for Russian Hill framing shop, Frame-O-Rama. Each canvas started out as a discarded, archival, matte board that the artist cut down in the course of the work day and would have otherwise been thrown away.

Paloma’s purposefully naïve style of drawing belies his formal training. Because he didn’t officially graduate from California College of the Arts, Paloma modestly leaves his nearly completed MFA in painting and drawing off his resume. (Scholarship money fell through with just four credits to complete.) Influences include Twombly, Bacon, Warhol, Guston, and Pettibon.

Since art school, Paloma has caught the eye of quite a few young curators who have a talent for spotting emerging talent, including Eleanor Harwood, Joyce Grimm of Triple Base Gallery, and Kerry Johnston of Blankspace Gallery.

Paloma was raised in Huntington Beach but rejected “beach culture” and came to San Francisco in 1996 for the punk rock music scene. But he had begun drawing long before that. His talent was revealed as a kid while pen-paling with his family’s Swedish exchange student. Despite the house guest’s long visit, the friends were unable to correspond in Swedish or English so they drew pictures instead.

Paloma is prolific and multi-faceted, working on multiple projects and series at once. In addition to “The Daily Strangers,” there is “Soft Sculpture” and “Flag Project,” to name just two.

The original soft sculpture guy, Claes Oldenburg, made the seminal “Soft Bathtub” in 1966. Paloma puts his trademark edgy spin on the concept, depicting subject matter that reflects the perils of his Sixth and Market address, including guns, cigarettes, a sack lunch, and whiskey bottle. (Robert Crumb’s brother happens to live next door.)

“Flag Project” gently mocks the Market Street Beautification Project. Artists and non-artists alike are invited to sew a flag and hang it from the pvc flagpole mounted outside Paloma’s third floor windowsill. No theme is required and there are no rules. Brian Pederson's contribution was "Tighty-Whities"; Joan Zamora’s composition featured familiar Sixth Street icons, including a pigeon and a chicken leg.

But book art is how this versatile artist is making his mark on the art world.

Different chapters from Paloma’s ribald, audio-accompanied “Books on Tape Series Vol. 2” were recently aquired by three prestigous institutions including UC Berkeley’s Bancroft Library, Stanford University Library, and most recently the Library of the University of Applied Arts in Vienna, Austria.

Marshall Weber, Director of Collection Development at Booklyn Artist Alliance (Brooklyn, NY), describes Paloma’s appeal to curators and collectors: “Kottie tells it like it is – really heartfelt work, with no pulled punches, real stories about poverty, violence, shitty romance, the crappy artworld and its dorky myths, he’s the bomb.” 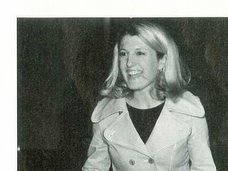 Marianna Stark
(pronounced mare-ree-ANNE-nuh) is a fourth generation San Franciscan. She received her B.A. in Art History from U.C. Berkeley in 1992. She enjoys a successful career in merchandising and has worked for blue chip specialty retailers I. Magnin, Sharper Image, Prada USA, Brooks Brothers, and most significantly, ten rewarding years with Gap Inc. Marianna is an active member of SFMOMA’s SECA (Society for the Encouragement of Contemporary Art) and ArtTable, the national leadership organization for women in the arts. Over the years she has held leadership positions in many different arts organizations including two years on the board of ArtPoint, the young professionals’ auxiliary of the San Francisco Fine Arts Museums. Marianna’s love for the arts was sparked by her grandfather, E. Preston Ames, an Academy Award winning Art Director, and by Prudy Kohler's History of Art course at San Francisco University High School. Sadly, Marianna does not have much wall space in her 750 sq. ft. Russian Hill condominium. Her latest acquisition is a J. Weiss Design remodel of her kitchen and bath. http://www.jweissdesign.com/projects/russian-hill-residence.html

On the "First Thursday" of every month, most of the Union Square galleries stay open late so nine-to-fivers can make it to see the new exhibitions. Former Western Union HQ 49 Geary, next-door-neighbor 77 Geary and 251 Post are big office buildings that are dense with galleries. Emerging, mid-career and established artists are all represented. This is not an organized event but 5:30pm-7pm covers most of the participating spaces. If you still have time be sure to hit the stand-alone galleries on Grant, Post and Sutter.

Disagree with a categorization? Just let me know & I'll fix it!

Events Where There's Good Art At Below Market Prices